One of the Challenges we face on a daily basis is optimizing our performance, and getting tasks done quicker and easier. Most of the time , we are performing the same tasks over and over, and as we all know that’s what computers do best , and humans do worst.  None of these tips will solve that killer issue you have been tracking for weeks , but they might help you spend less time on the mundane parts of a troubleshooting session.

Therefore in the spirit of my TOP 10 community tools , I would like to share 10 tips and shortcuts  that I have accumulated over time, some I learned from others, some I discovered on my own.   Some of these might be “DUH!” tips to some folks, but I’m betting not everyone knows all of  these. I think anyone who has to administer or support Skype for Business and/or  Windows  server on a daily basis can shave a few minutes from their days with these “little gems”

10. CSCP move multi-select- For this first tip ,  let me set the scene for you. You are working in Skype for Business (S4B) control panel silverlight application, you have to add a new rule to a dialplan that has 40-50 or rules in it. You need this rule to be the 4th rule in the list. When you use the CSCP to add the rule , it goes to the bottom of the list. Until my colleague Jonmck (@ucomsgeek) showed me this tip, I had 2 choices. #1 click the up arrow 46 times , or use Powershell (POSH). While I would probably prefer to use POSH ( the –priority switch will accomplish this ) , there are times when this is simply not a viable  option ( ex. training a new customer, no easy server access  etc) . To move the bottom rule UP 46 places , all you have to do it move the 45 rules above it DOWN! (DOH!). Because of Silverlight not all standard windows commands are supported , luckily Ctrl-a ( all) and ctrl-click( select-unselect) are. As shown below , by selecting rule2 and rule3 and clicking down , Rule1 goes up! (DOH!) A few clicks versus MANY clicks!

9. ExcludeActivityLevel switch- The next tip is a powershell one. Frequently when standing up a new Lync server  you need to quickly find out the status of Lync services You also know that the POSH command  “Get-CsWindowService”  command will do this. You have probably already seen that sometimes this command can take a few seconds to run, partially because by default the command is also getting the current activity level of all services. That is  where the  “-excludeactivitylevel” switch comes in very handy. Couple this command with the POSH auto complete feature and you can get service status by typing “get-cswi<tab><space><dash>e<tab><enter>” (Time saver!)

8. “Lync” management Shell- Speaking of PowerShell, we have all seen the “Lync Server Managment shell” shortcut added when we install admin tools on a server. Have you ever wondered what the difference is between that and “regular” PowerShell is? Well here’s a little secret gang… when using PowerShell 3.0 and higher NOTHING IS DIFFERENT. This is because while that command loads the Lync module, PowerShell will always find all installed modules and auto loads them when needed, as illustrated below. Note below that when I opened the standard windows PowerShell and ran “get-module” , I only had the basic commands , but when I typed a Lync command ( look familiar?) and then ran “get-module” again,  Lync was loaded. Personally,  I prefer the default properties of the  Powershell shortcut and do not think I have ever used “Lync Shell”. I don’t know this for certain, but I wonder if this shell remains for those Exchange Admins who are used to a “real” admin shell ( that does much more than a standard shell). So don’t exit out of a regular PowerShell  because you think you need to for Lync access) (Time saver!!) 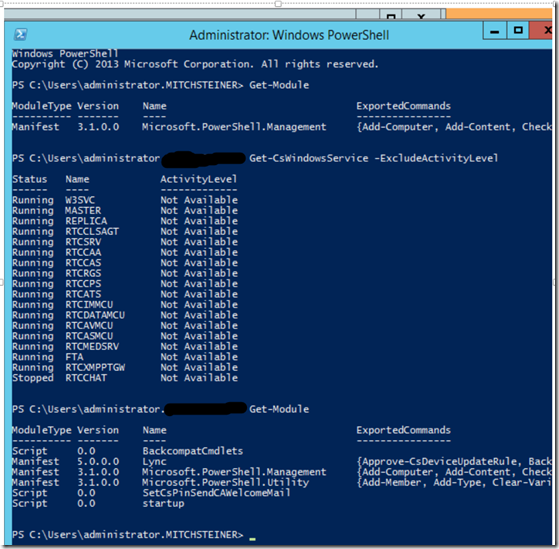 7.  Always build Edge server as a pool – The next tip wont save time when you do it , it might save you time in the future. As you are aware , S4b/Lync treats EVERYTHING as a Pool ( FE , mediation etc).When you walk the new edge pool wizard, you are asked to choose between a single server  and a multi server pool. if you only have a single edge , you might be tempted to select single, but DON’T! If you select multi server pool you can still add only a single server to the pool. Later , if you decide to add a second server to that edge , it will be a simple chore, however if you selected “single” initially,  you are unable to convert it,  and have much more work on your hands! PS, if you use @rbrynteson and @realtimeuc 's LyncValidator ( and you should!) this will be done for you automatically. ( Future Time saver!)

6. Edge server static routes – The next  time saver is also related to the edge server , and also is something that will save time in the future, but should be done when deploying edge servers. As everyone knows,  a multi homed windows server has very specific network interface requirements, including static routes with no gateway on the internal side. Since I learned about this tip in around 2010 , I have been using just 3 netsh commands to point all RFC1918 (private) addresses to the internal interface. As long as your network only uses legal private addresses internally you don’t need to ask the networking group to “provide a list of all internal subnets” for you configure the edge interfaces. Of course if you use @patrichard  set-cs2013featrues script as recommended in my Top 10 tools post, it will do this for you, however I usually have this done when building the server prior to  installing prereqs,  so I have the person building the server run the following 3 commands for me. As a rule I try to call the internal interface “internal” but you could call it “TPID”  if you like just ( be sure to let me know if you do!) and  use whatever name you choose in the following commands, this way if any new subnet are added after the edge deployment, you wont have to revisit every edge’s host’s file.

PS If you will be at MS Ignite 2015 find me and say hello! – also look for my upcoming review right here at TPID Blog!
Posted by Mitch Steiner at 2:31 PM